Bullying has attracted a lot of attention, and it should.  People are much more aware of the damage that can be inflicted on a person’s psyche from any type of bullying; depression and suicide are the most imminent dangers.    The statistics about suicides related to bullying are downright scary:

Bully victims are between 2 to 9 times more likely to consider suicide than non-victims, according to studies by Yale University

Kids today are aware of the dangers of bullying, and my nine-year-old son sees it as his responsibility to protect his six-year-old sister from bullying.  This is his primary reason for taking karate, he says.  If she comes home from school with stories about someone treating her unkindly, he gets very angry and feels bad that he wasn’t there to protect her (he is home schooled due to the rigors of his therapy program to help him recover from autism).  Sweet?  I’m concerned that he may have taken this thought too far.

Lately, he is working through the concept of teasing.  Is teasing the same as bullying?  A few months ago, some boys in our church began teasing him about his aversion to sugar.  As part of his therapy he is on a special diet which eliminates sugar.  It’s not a big deal because fortunately, he loathes sugar.  Always has.  When he was a baby I gave him his first taste of ice cream and he gagged on it.  I gave him a bit of a chocolate chip cookie, and he spit it out.  For his first birthday, he looked at the cake, but was not in the least bit interested in it.  The fact that he does not like sugary foods is odd and funny to his peers, so a few of the boys taunted him about it.  I am 100% sure that none of these boys meant any harm and that their teasing fell into the realm of raillery which is good-natured ridicule and affectionate mocking.  However, my son didn’t interpret it this way.  Their taunts made him angry.  He even gets angry if one child teases another child.  It happened just this past Sunday when he was curled up and in tears over this and the fact that the child who did the teasing wouldn’t apologize to the person she teased.  She likely didn’t feel she did anything wrong.  I don’t think she did either, and the boy she teased didn’t seem phased.  My son does not recognize the affection and friendship at the foundation, and this is what I want to teach him.

Pro-social teasing is very beneficial in establishing and maintaining friendships, promoting bonding, and affectionate mocking aids in conflict resolution by teaching people to deal with interpersonal conflict in a safe manner with a person they consider a friend.  Good-natured teasing can actually even raise self esteem when it is done from a foundation of love and mutual understanding of each other’s intent.  But what happens when intent is misinterpreted and misunderstood?  There is a very good article that addresses that in Psychology Today, When Does Teasing Go Too Far?

There is a line in the sand.  Boundaries.  Each person has them, and each person’s boundary lines are different.  For those of us who are neuro-typical, who have an understanding of societal and cultural norms, it is our responsibility to recognize the signs when we cross those lines and to immediately back off and apologize when our banter violates a boundary.  We are also responsible to recognize whether there is benevolent or malevolent intent.  People like my son, who are learning to navigate our world, find this a challenge.  I need to teach my son how to interpret body language and facial expressions to know whether the teasing was okay or not.  This does not come easy or natural for him, but he’s getting much better.

This is not just about him toughening up and getting thicker skin.  It’s about him learning the rules of engagement in friendly society, and learning that not everyone is a threat.  Most people have good intentions and use teasing as a means to connect with him in friendship.  As confident as I am that those kids in our church did not intend any harm, I am confident that my son can navigate through this and learn how to be a kid in the group.

My son is a lot like Charlie Brown, often called a “block head” by Lucy who may or may not be labeled a bully.  Charlie Brown just wanted to be part of the gang, but knew he was different, as my son does.  He knew that things that were easy for some kids were difficult for him.  He was misunderstood and teased…some of the teasing good-natured; other teasing was malicious, but in the end the gang recognized that Charlie Brown is a good man and Charlie Brown knew he was accepted.  This is my hope for my son. 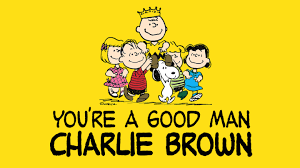